How mentally stimulating to see an advert on Channel 5 plugging their latest forthcoming 'Reality' TV show - "Britain’s Worst DIY-er". Another gem from the people who brought you "Britain’s Worst Driver"! Just think. The braying morons in the studio audience and those farting on their sofas at home will soon be able to slap their flippers together and screech with laughter as they watch yet another group of irritating 'Fame-at-Any-Price-ers' parading their potentially lethal incompetence for our entertainment. 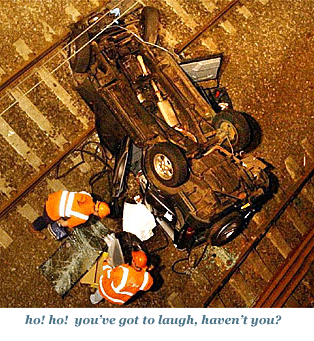 First there was "Britain’s Worst Driver" which made a star [Albeit at Z League level] of some stupid woman called Maureen who weekly demonstrated the fact that she shouldn’t have been let out of the house unsupervised, never mind allowed behind the wheel of a car. How we roared with laughter as we watched her mounting the kerb, reversing into other vehicles and swerving all over the road! Absolutey side-splitting! What a shame she didn’t manage to plough into a queue of people waiting at a bus stop, or perhaps swerve into a group of children outside a primary school. What hilarious larks that would have been!

And now we have "Britain’s Worst DIY-er"! Well, get me to an Emergency rib Doctor quick, before I split my sides! What comedy classics will this forthcoming show provide as the next crop of 'Proto-Maureens' try to outdo each other in attempt to provoke the loudest squeals from the baying public?…​

"What’s that? Joe’s just hit his thumb with a hammer? So what! Eric’s just drilled a hole in his own eyeball and all the juice is dripping out!

"Oh no. Hang on a minute, tho'. This is even better! Steve’s wired up the house wrong and electrocuted his wife! Look! You can hear her sizzling and everything! What a celebrity! What a hoot!"

"But wait! There’s even better to come. Jimmy’s just about to drill through a gaspipe and incinerate half the street! Ho! Ho! Quick --get him his own television show and throw a few hundred grand at him for product endorsements!"

What’s next for Channel 5? How’s about "Britain’s Worst Surgeon", where a group of whiskey-sodden scalpel wielders compete to be struck off the Medical Register in the most amusing way. Think of the hilarity as we watch some poor sod bleeding to death on the operating table after going in for a routine operation…​ Or maybe "Britain’s Worst Air-Traffic Controller"

Ho! Ho! This one could run and run! --Although I don’t think there’s much competition at the minute for the title of "Britain’s Worst Television Company"]

[Nor are there any prizes for any of you bastards who make the obvious "Britain’s Worst Blog" comment!]