Last night [Wednesday] was the fortnighly pub quiz at my regular watering-hole, The Salisbury pub in Manchester. And would you believe it? --The big Guy [Yours Truly] and his trusty sidekick [The Missus] won! Not only that, but we won for the second time running. With the first prize being £20 worth of beer and given the fact that we still had a Tenner’s worth of free booze left from last week’s majestic victory, I reckon we actually made a profit on the night, as we only spent about a Tenner in the pub.

The thing that puzzles me tho' is the way that every person you come across in a Pub Quiz [No matter how congenitally idiotic otherwise] always seems to have some 'Specialist Subject' area of knowledge. Often in the most unexpected subjects. 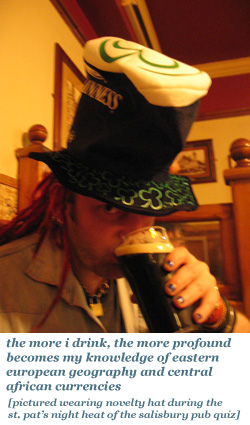 For example, The Missus is always amazed by my Geographical knowledge. Almost every time a question comes up along the lines of "Which countries border on…​.?" ,"What is the capital of…​?", "What country lies due west of…​? and the like, I seem to know the answer. Why? - I always hated Geography at school. In my day it seemed to consist of little more than copying page after page out of dreary textbooks, detailing the principal exports or average rainfall of some Godforsaken place you’d scarcely heard of and had no interest in whatsoever [For some reason the word Borneo springs to mind at this point]. And yet, there I am every fortnight in the pub quiz, blithely scribbling down the currency of Latvia or the capital city of Indonesia with nary a second thought. Where did this knowledge come from? Why does it stick in my brain, when it interests me not a jot?

Likewise, The Missus has an incredible ability to put a name to the stupid American fizzers of the most obscure B-movie and TV series actors and actresses, which comes in incredibly handy in the pub quiz picture round. She’ll take a look at the sheet of mugshots of assorted nobodies and ne-er-do-wells and inform me that "That’s Dwight Z. Mingerburger. I recognise him coz he was the third bloke on the left in the background in the fight scene in that film we watched the other night". The really incredible thing in her case being the fact that she seems to view most of the films we watch together through closed eyelids whilst lying on the sofa making snoring noises.

Anyway, back to my tedious musings on the subject of the strange data which inhabits the void between my lugs…​

I was just thinking that it’s strange how in a seemingly ironic [and quite possibly in a Post-Modernist way] when I’m under the intense pressure that comes with 'Thinking for Your Drinking' I seem to remember feck all about the stuff I like to kid mysel I know a lot about. You know those 'rugged', 'manly' things like 'Football' and 'Rock’n’Roll that we fellers all like to consider oursels experts on. I mean, there I was last night, scratching my wee bonce for about half an hour trying to remember the name of the band that did the song 'Go wild in The Country' and for some fuckwitted reason writing that the football team Boa Vista played out of Brasil while throwin' the answers to questions about the constituent parts of Queen Victoria’s underwear and the collective noun for a gathering of Jodhpurs out of me like an Encyclopaedia [er…​ with a pen…​ in a pub…​ writing…​].

This in spite of the fact that I spent most of my wrist-strengthening teenage years madly in lust with the boul' Annabella Lwin from said band -which thankfully, I eventually remembered were Bow Wow Wow. 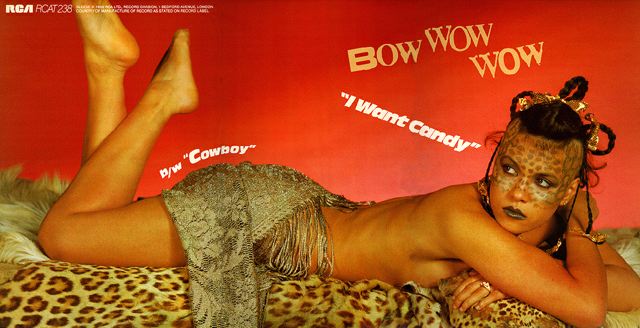 Oh dear! That was possibly the most boring entry i’ll ever write for this thing but I kinda felt I needed to scrawl sommit down coz it had been such a while. Gotta keep the oul hand in, y’know!