Idly thumbing through the TV book in the vague hope that there might be something decent on of a Sunday for a change, I notice that my favourite purveyors of chewing gum for the brain, Channel 5 are showing yet another 'touchy feely' documentary about some poor [and no doubt 'courageous' and 'inspiring'] brat who’s been born with some rare genetic disease that…​.

Well. That’s as far as I could be arsed reading before my booglers started glazing over, but I could hazard a guess: 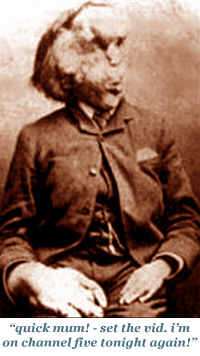 …​or any suitably gruesome combination or the above, if not something even more bizarre that Channel 5 have scraped off some abortionist’s slab somewhere and prodded blinking and being 'courageous' into the limelight for the great British viewing public to gawp at and prod with their remote controls.

Of course Channel 5 would doubtless have us believe that these 'Freakumentaries' are inspirational tales of courage in the face of adversity, 'Ultimate proof of the indomitability of the human spirit' and other such platitudinous bollox. But really, who are they trying to kid?! This crap is nothing more than the good old traditional Victorian Freakshow dragged limping and drooling into the 21st century. Mind you. At least The Victorians had the honesty not to try and dress up their voyeuristic peeping-tommery as some kind of 'We feel your pain' love-in for the genetically challenged.

The sound of tusks scratching against a coffin lid you can hear is The Elephant Man spinning in his grave!