Last night [For the fourth feckin' time in my cack-handed career] I managed to knock a bottle of beer over in proximity to my computer. Unfortunately, this time the wee blighter didnae survive the assault. He’s been with me about 5 years and has resisted the intrusion of Red Wine and Guinness, but was finally brought to his knees by some Marston’s Pedigree Ale 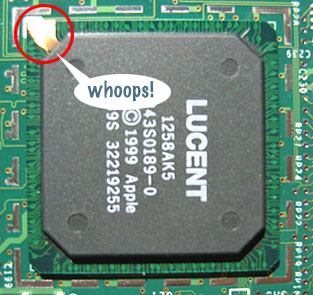 Unfortunately, although I dried the comp out as best I could and left it upside down and dismantled overnight, the Magic Pixies did not fix it while I slept. So it was a quick mission to Maplin’s this morning, for a set of hex keys to open up the patient and in I went.

Taking each component out in turn and swopping it with same from a similar laptop, I eventually tracked down the problem to the I/O Board. Closer examination revealed that the connections to one of the chips on the board were damaged with a black mark in evidence, presumably where a drop of beer caused a short-circuit or burn out. I’ve found the I/O Boards on sale in the US for about $200, but havenae been able to track down a European source yet. After my past experiences with rip-off HM Customs charges, there’s no way I’m going to import one from the US, so it might be time to save up for a new laptop. I’d been aiming to upgrade by about the middle of next year anyway, but this has kind of forced my hand, so to speak.