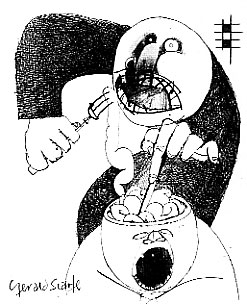 A friendly pat on the back [with a sledgehammer] to the Dickie Beasley at Fuckwitte, Pilloque and Spratt who came up with the stunningly original advert currently airing for the Halifax Building Society!

The way that office block, weighs anchor and glides off down the street like a frigate, complete with fluttering tarpaulins for sails is a piece of cinematic genius. Shame on the Monty Python team for blatantly plagiarising this idea back in 1983 with the vastly inferior Crimson Permanent Insurance sketch at the beginning of their film The Meaning of Life!

And, after seeing the current adverts for some shitty mortgage company [doubtless also the work of the talented Mr. Beasley and friends] which feature a twat in a suit talking from an upper storey window to a huge crowd of people, who then answer him in chorus -I’m willing to wager it was the same light-fingered member of the Python team, who travelled back in time to 1979 and again blatantly plagiarised that idea for a few tawdry scenes in the film The Life of Brian.

This is far from being the first time I’ve noticed fresh new ideas from advertising campaigns cropping up years previously in tired old classic movies from third-rate directors -who often make little or no attempt to hide the source of their thievery. Isn’t it about time steps were taken to protect the intellectual property rights of the hundreds of highly imaginative and creative advertising executives out there, who must constantly suffer the indignity of having their portfolio of ideas ransacked by time-travelling 'Copycats' from the past?!