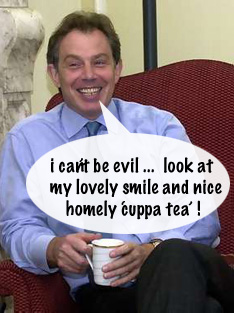 Nice to see all the main parties falling into line and voting for [albeit with a couple of insignificant amendments] The Government’s new Anti-Terror laws. These were brought in after the senile cunts in the House of Lords actually woke up long enough to realise that the previous policy of allowing anyone suspected of "Being a Johnny Foreigner" er…​ sorry, I mean of "Planning Terrorism" to be detained indefinitely without charge and without them or their solicitors being given access to the evidence against them was "not very British, Old Chap!"

The new laws [and this time approved by tHe Lords -so it’s all jolly good and democratic!] will allow anyone suspected of being a terrorist to be placed under a "Control Order" which means, amongst other things you can be…​.

etc. etc. If the Government even suspects you might be a terrorist.

Does anyone else remember the days when we used to sneer at the Soviet Bloc for imposing exactly the same restrictions on their own citizens who had dared to 'Deviate from official Government thinking' -or am I just living in some kind of Kafka-esque parallel universe these days?

If you listen carefully you might just hear the sound of George Orwell spinning in his grave -although it’s more likely to be drowned out by the baying chorus of the plankton brained majority of the British public screeching "Well. If you’ve done nuffink wrong, you’ve got nuffink to worry about, innit!" whilst their semi-literate newspapers tell them the week’s real big story is that some air-headed bimbo has split up with her moronic boyfriend.