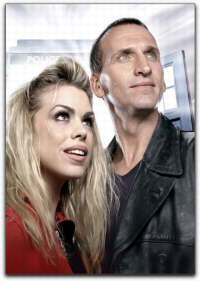 Well, last night I sat down to watch the much-heralded rebirth of the formerly magnificent Doctor Who, with Christopher Ecclestone as The Doctor and Billie Piper as his travelling companion Rose. In spite of my instinctive dislike of the latter [I’m sorry, but you’ve got to feel some kind of contempt for anyone who’d marry a twat like Chris Evans! and because of my complete ignorance of [and therefore lack of prejudice against] the former, I determined to give the programme a 'Fair Go'.

Well, the first thing that struck me was that it didn’t really feel like I was watching Doctor Who; new cast, new TARDIS innards, new title sequence and logo. About the only thing that remained recogniseable from past series was the TARDIS exterior, the dematerialisation sound effects and the theme tune. Granted, there is a certain inevitability about this. The nineteen year gap since the ending of the last series pretty effectively scuppers any attempt at continuity.

As regards the actors; I quite liked Christopher Ecclestone, although I thought that his character -he seems to be going down the slightly mischevious, slightly comical, slightly scatterbrained route so well-trodden by Tom baker in the past- seemed slightly out of keeping with his battered leather jacket, big boots, crop headed 'This doctor can punch you out' visual image. Billie Piper was thankfully not as irritating as I had feared she might be. Let’s face it tho' no Doctor Who travelling companion is ever likely to come anywhere near the awful Ace, the repellent Adric, or the bonnie-fuckin-langford Mel on that score -and she actually seems to be able to act a bit. Mind you, her role so far seems to involve a lot of standing around with her hair blowing about in slow motion and her mouth hanging open in that way which a lot of directors and photographers seem to think looks terribly erotic, but which I always find makes the girl in question look terminally gormless. O well, as someone brought up on Leela and the first Romana, I’m aware that the companion is primarily there as a means of keeping the young lads watching after puberty sets in, so we’ve got to expect that.

The plot, inasmuch as there was one for the first episode, was extremely weak and pretty much amounted to 'Rose helped The Doctor save the world by swinging on a bit of chain and kicking a test-tube out of his hand'. There was no lead up to the denouément -out of the blue The Doctor appears, warning that aliens are about to take over the entire planet…​ this then manifests itself in a few shop window dummies coming to life for a minute or two and causing only slightly more mayhem than you’d see on the streets of any British city of a Friday or Saturday night…​

Then Rose does her trapeze act and it’s all over and The Earth is saved -hurrah!

Now I realise there’s a lot to pack into the first episode; introducing the characters, engineering the travelling companion’s decision to join The Doctor on his travels and so forth. This doesn’t leave a lot of time for plot development, so I’m hoping that what I witnessed last night was a a workaround for this, whereby we [in the form of Rose] stumble across The Doctor as he ties up the loose ends of a longer story which has been playing out 'Off-Stage', so to speak. And from then on we’re 'In at the start' for subsequent storylines. Unfortunately I’ve got a feeling that this won’t be the case. Reading through the blurb for the forthcoming series, it seems that each episode will comprise a self-contained story featuring a different 'Monster' for The Doctor and Rose to come to grips with, rather than [as in the olden days] allowing a single storyline to develop over several episodes -each one with a cliffhanger ending.

If I’m right in this predicition [I hope I’m wrong], then last night’s tissue-thin plotline is likely to be the norm, rather than a one-off device to kick-start the series. In the good old days, it was the scenery that was lacking in substance, whilst the storylines were nearly always gripping and well-crafted by quality writers such as Terrence Dicks and douglas Adams. Last night’s first episode threatens the reverse; that we’re going to be offered up an awful 'Hollywood-esque' Doctor Who, honed for the 'goldfish attention span' youngsters of today --"Never mind the plot kids - Just sit back and enjoy the bangs and flashes!"

Only time [travel] will tell!