This came up in a random "Trip down Memory Lane" conversation in the pub wi' my wee sister and bro the other day. So in the interests of preserving the rules of this great sport for future generations, I present the comprehensive guide to Canteen Table Chess, as practiced at Ballyclare High School, during my incarceration there from 1976-1983:

Meals are served from a central serving hatch. Each patiently waiting table is given the nod from the all powerful dinner-ladies on patrol, to join the queue to be served. Unlike many establishments, where the entire meal [main course and pudding] is served together on a "prison style" compartmented tray, Ballyclare favoured the classier "two-servings on real plates" approach.

After the main course had been eaten, the people on the ends of each table where charged with returning the dirty plates and cutlery from the first course back to the serving hatch, when the table queued up for pudding. Therefore: 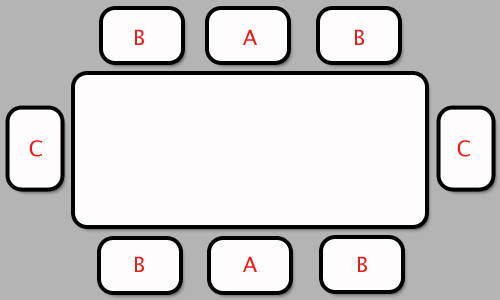 Was to be avoided at all costs and was generally the unwanted refuge of the poor sods who’d had the misfortune to have their penultimate lesson before lunch in a room far-flung from the canteen and thus arrived out of breath and too late to claim a more strategically advantageous chair. On drawing the short straw of a Position C chair, it was vitally important to shout "Baggsy no plates!" before your rival on the opposite end of the table did. This "baggsied" you the right to be Knives and Forks, which, although an unpleasant task, was at least one-step up from being Plates.

"Knives and Forks" would have to return the used main course cutlery to the serving hatch when the table queued up for pudding, which basically involved carrying a single plate laden with dirty knives and forks - no great hardship.

"Plates" on the other hand, had to struggle up to the hatch with a pile of dirty plates and balancing this pile usually involved scraping all the leavings from all the other plates onto the plate at the top of the pile, for ease of stacking.

The rules, although unwritten, were very strict. Even if you were at the table before your opposite number, if he or she shouted "Baggsy no plates" before you, you were 'Plates'. Easy to lose out on that one, if you were deep in conversation with a mate, but a lesson soon learned. Canteen chess requires concentration at all times!

In the interests of fairness tho', roles where reversed for pudding and whoever had been Plates for the main course got to be Spoons for pudding, while his opponent became Bowls. However as this merely involved carrying a stack of bowls [which had a higher tendency to be scraped clean than first course plates] back to the serving hatch, it was a minor irritation. 'Spoons', involving as it did, merely returning a bowl with eight spoons in it to the serving hatch, was the easiest of all the crockery and cutlery tasks.

Was the position of choice for the gambling man. If your table filled up and both Position C chairs were taken, you were home and dry and could enjoy a labour free lunch. However, if the Position C chair at the end of a table remained unoccupied then the Position B people at that end of the table had to split the tasks between them that would have been allotted to a Position C, if he or she had been present. For this reason, it was also important to make a strategic "Baggsy" when you sat at a Position B chair, just in case the table didn’t fill up. In this case, the best option to go for was a resounding cry of "Baggsy Knives and Forks!".

Although on the face of it, this might seem strange to the inexperienced amateur -after all, haven’t we already established that 'Spoons' was the least onerous of these chores?- it makes sense when the critical factor of "time" is taken into account.

'Bowls' and 'Spoons' had to stay at their posts until everyone else at the table had finished eating, which meant that, even if you gobbled down your pudding in lightning fast time yourself, so as to get out to the tennis courts and play football with your mates for as long as possible before the end of lunch, you could be held up by a table full of slow eaters. Therefore 'Knives and Forks', although not as cushy a job, did free you from any of the waiting associated with pudding and was the safer strategic position to adopt, if you wanted to maximise your lunch-hour.

Was the safe choice and the seat to take if you were lucky enough to be first to arrive at an empty table. However, it was not without it’s responsibilities; In the centre of each table was a big metallic jug filled with water and a stack of eight metal mugs for the diners to drink from. The Position A occupant who failed to shout "Baggsy no mugs!" before his opponent, incurred the task of returning this stack of mugs to the serving hatch at the end of the meal. This was obviously a very minor task indeed and for most of us it was generally preferable to take a Position A chair with 'mugs responsibilities', than to risk everything on a Position B and the subsequent nail-biting wait for a Position C to arrive at the end of your table. The only other cloud on a 'Mugs’s horizon was that, if the water jug ran dry, it was his/her responsibility to take it up to the serving hatch to be replenished.

Thus the novice player, on arriving in the canteen, breathless from running, was faced with a number of external factors on top of the standard rules of the game, which had to be taken into instant consideration:

Add into the mix the fact that while you were frantically looking round the canteen, taking in all these factors and weighing up your best move, a couple of hundred other kids were doing likewise, so that the "game board" was constantly changing, and it’s easy to see that the mental gymnastics of your average 'Grandmaster' are as idle musings, compared to the cerebral contortions required to master the game of Ballyclare High School Canteen Table Chess.