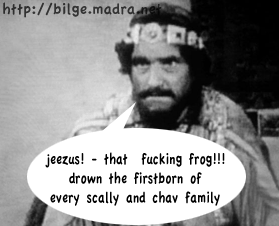 Can there be a rational human being out there who wouldn’t in the past have agreed that, in the interest of creating a better society for all of us, pretty much all Scallies and Chavs should be put down at birth and their bingo-clink wearing, tracksuit sporting, in-bred Neanderthal featured parents compulsorarily sterilised? I thought not - and this was probably your opinion even before that fucking annoying Frog Ringtone started to monopolise every commercial break on every TV and radio station in the land. Now, "Post-Frog" there really can’t be any coherent counter-argument at all. Can there?

Instinct might initially lead you to believe your ire for this onslaught on the braincells ought to be targetted against the inventor of said ringtone -a certain Daniel Malmedahl of Sweden- and indeed, who wouldn’t feel the better for taking a large housebrick to his stupid face? However, I think this might be a bit of a 'kneejerk reaction', for after all the man himself has said that he created the fuck-irritating-frog as a private joke between himself and a couple of mates. He can’t really be held totally responsible for the fact that some sharp-suited businessmen were quick to realise the potential for huge wodges of cash to be earned by peddling his wall-headbuttingly-irritating moron-fodder to that captive market in the UK that would cheerily purchase a dollop of steaming dogshit on a stick --if it made a repetitive bleep noise and carried a sportswear brand label.

Yes folks. Every time you see that ad and get an uncontrollable urge to put the telly through the fucking window, just remember that somewhere -possibly in house near you- some strategically shaved chimpanzee in tracksuit, rancid trainers and a back to front baseball cap is throwing back his or her brain-dead rat-like face and snorting with hysterical laughter, fingers tapping away furiously on the keyboard of their mobile phone, typing in mum’s credit card number and helping buy another few minutes airtime for the instruments of your torture.

You know King Herod was right!