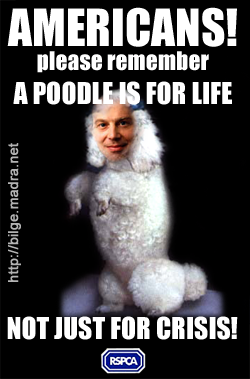 So Tony Blair has finally reaped his reward for being a good little poodle and following his master into Iraq, has he?

Oh! - did I say "Tony Blair has reaped his reward…​?" Silly me! The beloved leader and his cronies are, thankfully, well-protected by the state’s finest. No. I’m afraid it was Joe [and Joanna] Public who kopped for the inevitable. But then, we knew that was the way it was going to be, didn’t we? Now, we’re going to have to suffer the endless 'wannabe Churchillian' speeches from the bastards who provoked this attack in the first place. Like all Armchair Generals they will promise "Not to flinch", to "Stand firm", to "Leave no stone unturned", to "Carry on as normal" and to "Never give in".

All admirable sentiments and so much the easier to make when you’re constantly protected by hordes of armed police and secret-servicemen and are ferried everywhere in an armoured limousine. So you never actually have to do any actual "Standing firm" or "Carrying on as normal" on a crowded tube train or London bus.

I also notice that, presumably as part of the G8 Summit’s resolutions on protecting the environment, we’re going to continue with the policy of reducing the damage to the world’s forests by only using half as much paper in our history books. All that boring background stuff, which only serves to confuse people; the passages about 'Imperialism', 'Protecting oil supplies', 'Propping up foul dictators' [as long as they’re on our side], 'Bombing and invading other countries' and the like will now be replaced with an easier to understand introductory chapter which begins:

"…​Once upon a time there was an evil man called Osama Bin Laden. One day Osama woke up and thought to himself "I feel like being really gratuitously evil today. I know! I think I’ll bomb the United States of America for absolutely no reason whatsoever, except that I’m quite jealous of their 'Free-damm' and 'Dee-maa-cracy'…​."

Dontcha just love it when you don’t have to think?!