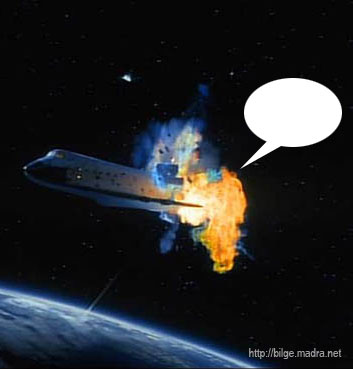 Have you ever noticed how in every Science Fiction film ever made, every laser gun blast, every rocket engine firing, every explosion which happens in the vacuum of outer space is always acoustically adorned with the best 'Zaps', 'Roars' and 'Booms' the sound effects department can produce?

The clue is in the phrase "Vacuum of Space". We all learned in first-year Physics that sound disnae travel in a vacuum, so why this ridiculous aural accompaniment? Is it because the film-makers think the audience is so fuck-witted that, if a spaceship blows up without "Hollywood Sound Effect no.327 - Atomic Bomb Loud [12secs]" blaring from the speakers, they’ll think the projector is broken or that they’ve been short-changed in some way? In fact the only Sci-Fi film I can think of which uses silence in the outer space scenes is 2001: A Space Odyssey, presumably because Arthur C Clarke would have kicked the Director’s arse all the way to Andromeda and back if he’d made it any other way. And you know what? - it works wonderfully. The scenes of the attempted rescue of the the crewman [whose name escapes me at the mo'] who has drifted away from the ship are a hundred times more frightening and give a hundred times better the flavour of the infinite cold emptiness of space for taking place in absolute silence, than several dozen decibels of bangs, crashes, beeps and whistles ever could.

Strangely enough, whenever I express my irritation at this noise pollution with a weary "Oh great…​ 'Noisy Space'!" as the first inevitable outer space sound effect blasts from the speakers when I sit down to watch a Sci-Fi film, I usually get accused of being some kind of nerd and told to shut up and enjoy the film -even tho' it’s been completely ruined for me by that stage. Is it really so nerdy? I mean, if you were watching a film where a couple of the characters walked into the sea and then continued having a normal conversation underwater, would you not think it a bit farcical? Well, sound travelling in a vacuum is just as ridiculous as people breathing and talking underwater. So next time you’re watching a Sci-Fi film, make sure the volume’s not turned up too loud. It’s noisy out in space!