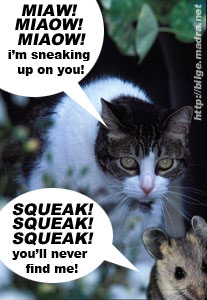 That was the sound of the mighty Leopard, slipping through the jungle like a wraith, in silent pursuit of his prey.

That was the sound of a rat, sneaking through the dark and musty corner of your cellar in search of a discarded crust.

Yes folks! - it’s another busy day in the life of one of my favourite "Get Paid to Cock Things Up" professions: The TV and movie soundman. Have you ever noticed how animals on the box seem to be unable to conquer the urge to "make their signature noise" continually? Never mind if they’re supposed to be sneaking up on their next meal, or tip-toeing away in order not to become somebody else’s next one, those beasts of the silver-screen just can’t help making a racket!

Presumably it’s because the soundman has decided that we’re so fuckwitted we wouldnae know a duck was a duck unless it was perpetually quacking, or a mouse was a mouse if it stopped squeaking for long enough to draw breath. So much for the quiet of the countryside!