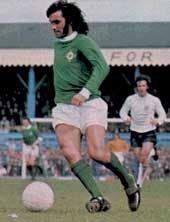 Further to yesterday’s post about George Best’s funeral and noting Callum Best’s emotional reading of the Newtownabbey Advertiser standard poem sent in to him by a member of the public, I am minded to pay my own tribute in verse form.

From the distant cobweb bedecked corners of my brain, comes the memory of a rhyme which did the rounds for a few months while I was a snotty-nosed pupil at Mossley Primary School back in the 1970s. An era when Best was at the height of his powers. Sung enthusiastically in the playground, to the tune of 'Jesus Christ Superstar', I think this moving opus should be recorded for posterity and added to those other great eulogies for the man we affectionately knew as *'Georgie':

Georgie Best, superstar
Wears frilly knickers
And a see-through bra
He wears a wig
He wears a wig*
And that’s why they call him
A dirty pig!

*Poetry scholars may dispute this duplicated line and, I am prepared to be corrected by others more familiar with the ouevre. However, this is how I remember the poem [It must be borne in mind that I was only nine or ten when I last took part in a public performance of the piece] and I feel that the repetition of this line, rather than demonstrating any literary shortcoming on the part of the original author, instead serves to crank up the dramatic tension that extra notch, in anticipation of the denouément of the final punchline.