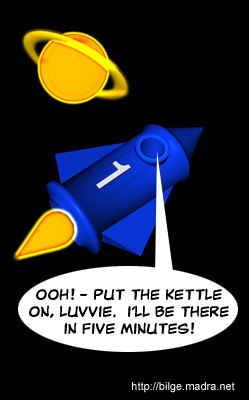 One day, many, many moons ago when we were wee, me and my brother R—— were playing an exciting game of Star Tek. Unconsciously echoing the nano-budgets of the TV programme itself, the drama was being played out through the medium of handwritten coded notes which --passed back and forward under the dining room door-- represented communication between the orbiting Enterprise and the doughty explorers on some alien planet’s surface. In a frenzy of excitement the recipient of the note would decode it to learn that either 'Bones' or Kirk down on the planet [AKA "R—— in the Dining Room"] had found a mysterious tunnel, or that Spock or Scotty back on board the ship [Yours Truly in the Living Room] were having trouble with the ship’s engines.

The game proceeded in this fashion for many a happy hour, until we decided that we wanted to inject an element of surprise into the proceedings. What was required was an external event to drive the game in new uncharted directions [To make it "Boldly Go Where No Game had Gone Before", if you will]. We needed a message from a third party, that would let us share in the fun of decoding it together.

So off we trouped into the kitchen, to find the Wee Mammy busy making the dinner […​or Lunch, …​or Tea]. Isn’t it funny how when you think back on childhood memories of your Mammy, you come to the inescapable conclusion that she must have lived permanently in the kitchen?]. Anyway, we explained our predicament to The Mammy and asked her to write us a coded note that we could then both decipher back in the Living Room …​er…​ I mean "Back on board The Enterprise".

Mammy wasnae too keen on the idea, professing an ignorance both of the plot of Star Trek and of the arts of espionage. "I wouldn’t know what to write!" she protested.

"Just make something up!" we pleaded.

"Anything to do with space!" we persisted.

"But I don’t know anything about space!" she shrugged

We argued back and forward like this for several minutes until [probably as the only way she could see of getting rid of us] Mammy reluctantly agreed to compose a coded message from Starfleet HQ, for us to decode. So we showed her the top cryptographic system we were using; "A=Z, B=Y, C=X, D=W…​. " etc [I’d like to see those lousy Klingons try and crack that one!] and we left her with a pen, staring blankly at a sheet of paper, with a thoughtful expression on her face.

A few minutes later, word arrived that the message was ready and off me and R—— 'transported' to the living room to decode our top secret communiqué. I read out each letter one by one to R——, who consulted our 'key' and read the corresponding decoded letter back to me. As the seconds passed by, before our excited eyes, the thrilling content of the top secret message was revealed:

Me and R—— stared at the message and then at each other in dismay! Never in the history of intergalactic exploration and adventure can there have been received a more insipid communication. We’d been expecting to be sent off on a new challenging mission -there were infinite worlds out there to explore and infinite alien species with which to do battle- and instead we’d received word that some tit was nipping round for a cup of tea!

With our howls of disappointment preceding us, we charged back into the kitchen again to confront The Mammy. The poor woman, who hadnae wanted to write the fucking thing in the first place, squirmed in embarrassment as she was harangued for several minutes by two ungrateful brats explaining to her just exactly how completely rubbish her message had been. I seem to remember there was considerable debate as to whether the the utter boringness of the content, or the gayness of the name of our co-respondent’s craft disappointed us the most. I mean to say "Blueship One"?! -only a mother could come up with that one! Anyone of the male gender would tell you that spaceships need tough names like "Eagle Seven" and "Thundercloud Four", not fucking "Blueship One"! What the hell was the woman thinking of?! Jesus! Even to this day, it makes my blood boil, just remembering it!

Anyway, surprisingly enough, after listening to our extended literary critique of her first attempts at interstellar communication, The Mammy refused all further entreaties to "Write us another, better one" and so that particular episode of Star Trek fizzled to an inglorious end. Mind you, I remember that the phrase "Bob Blueface One" did creep temporarily into our vocabulary as an oft-misquoted but always laugh-inducing reference to The Mammy’s abortive first attempts at Science Fiction scriptwriting.

Well, that’s all for this episode. Tune in next week when I make a leather bikini out of two old chamois leathers, crawl into the coal bunker outside and become Leela, [Dr. Who’s] (http://www.bbc.co.uk/doctorwho/classic/gallery/fourthdoctor) glamorous assistant, travelling through time and space in a big soot filled concrete TARDIS