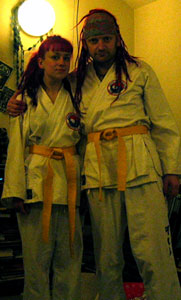 Woohoo! - found out tonight that Mazza and me had both passed our second Tai Kwondo grading [held on Sunday] and are now the proud possessors of yellow belts.

This was in spite of my cocking up Chon Ji the first time and having to do it again --D’oh!

I have a great excuse tho'…​

Whenever we’ve practiced it in the Dojang or when I’ve run through it at home, it’s always been in a room with windows along one side - and I/we’ve always started the pattern [and thus ended it] facing the windows. Now, at the grading the room had the same setup; windows along one side, but this time we started [and thus should have finished] facing away from them.

So off we all go on our pattern, under the watchful eye of Mr. I——, the examiner and things are progressing marvellously until I get to the fourteenth out of the nineteen moves. Suddenly I am facing the windows and my brain which, up to this point, has been keeping up a constant but partially helpful monologue of "Concentrate!…​ Don’t fuck it up!…​ Concentrate!…​ Don’t fuck it up!…​", suddenly switches into Pavlov’s Dog mode and starts sending triumphant neural impulses to my limbs instructing them "Just two middle punches forward and two back and we’ve done it, boys!…​"

Meanwhile a tiny and less forthright voice at the back of my head is whispering plaintively "We cannae have finished yet. It’s far too soon!…​" but unfortunately the rest of my body has been swayed by the brain’s over-confidence and I complete the [supposed] remaining four punches and end with a lusty shout of "Chon Ji!" --only to watch in horror as the entire rest of the group, instead of stopping where I did, continues move away from me, then wheels round and comes back towards me doing their two middle punches forward and back, before adding their own chorus of "Chon Ji!" to the dying echoes of my own idiotically premature yell.

Luckily, the class is so big that we’ve been divided into two lots for Chon Ji, so I’m allowed to try again with the second group. this time I complete the pattern relatively effortlessly by the simple expedient of ignoring my brain completely and letting my arms and legs get on with it by themselves.

The following Wednesday at class, I receive my yellow belt, with the rest of our group and thank the ancient Korean gods of 'Cocking Things Up' for letting me get away with it. The satisfaction of tying on the new belt is short-lived however, as Miss B—— [one of our instructors] wipes the smug grins off our faces by walking us through Dan Gun, the pattern we’ll be learning for our next grading and once more we are reduced to a shambling unco-ordinated rabble!

Oh well --practice makes perfect [as long as you remember to switch the brain off, first!]