Have you ever in your life heard the like of the bollox that’s going on in the press about Bird Flu?

I actually thought the media-led furore had died down again, after the hacks moved on to warning us that the whole country was about to become desiccated, because it hadnae rained in the Home Counties for more than a week. But now bird flu is back on the front pages with a vengeance thanks to "Mc Swan" who’s bitten the dust somewhere in scotland. 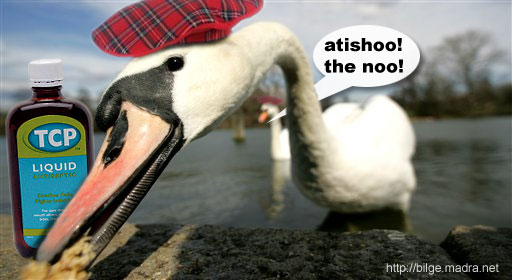 So, let’s examine the facts -The killer disease has spread across most of Asia and Eastern Europe and has so far decimated the world’s population to the tune of oh…​ let’s see…​ about a hundred people!

Well, it’s like the Black Death all over again, isn’t it! In the same time period as Bird Flu has been half-arsedly trying to lay waste the planet, more people have probably died by being struck by lightning, or through freak accidents involving root vegetables, than have succumbed to the risible ravages of this avian Harold Shipman wannabe. Yet you don’t see the tabloids devoting half of their moronic pages to dire warnings against wearing conductive hats, or becoming too intimate with a particularly coquettish cucumber, do you?

As the girlfriend says, whenever it’s mentioned on the news - "Why don’t they just put TCP on their beaks?"