"People ought not to be afraid of their governments…​

Governments ought to be afraid of their people!`"

Last night, in honour of Guy Fawkes night I rewatched the excellent V for Vendetta again.

For those of you who have yet to see the film, it is based on a graphic novel of the same name and is the story of…​ well, how to sum it up? think 'Guy Fawkes meets 1984, by the makers of The Matrix' and you’ll be on the right lines.

Definitely one of the best British films of recent times.

I willnae give too much of the plot away, in case you have yet to watch the film but, in essence:

In the near future, the US has ceased to exist as a world power and Britain is a totalitarian, Orwellian state, ruled by Adam Sutler [John Hurt] -a man who came to power, promising a return to traditional values and a crackdown on terrorists, homosexuals, islamists and so on.

[The original graphic novel was written in the middle of the Thatcher era, so you can draw your own conclusions, as to the ‘message in the music’!]

The main protagonist in the film is a young girl called Evey [Natalie Portman], who works as a general dogsbody in the state broadcasting company BTN. We meet her at the beginning of the movie as she ventures out one night, after curfew, to visit a sick uncle.

On the way she is cornered in an alleyway by a menacing gang of undercover state policemen, hunting for curfew breakers. Gang rape looks set to ensue when, all of a sudden, a dark stranger appears from out of the gloom, dressed top to toe in black, wearing a Guy Fawkes mask and speaking in Shakespearian English. This is V [Hugo Weaving], who --with a beltful of daggers and a fistful of ninja moves-- proceeds to educate the policemen as to the error of their ways and to save Evey from their not-so-amorous advances.

From this point on, Evey’s life and that of V become intertwined - all the more so when, shortly after, he mounts an audacious raid on BTN headquarters [where Evey works] and takes over the airwaves to broadcast to the British people and urge them to rise up against their fascist government on the next 5th of November.

Further adventures ensue as V continues a one-man war against the apparatus of the state and the leaders of the government, via a series of explosions and assassinations.

Against her will, Evey is drawn into the battle, as the secret police suspect she is V’s accomplice and try to hunt her down for arrest and inevitable torture.

An added twist to the plot arrives in the shape of Inspector Finch [Stephen Rea] of the regular police, who is charged with tracking V down. In doing so, he begins to uncover a web of lies and deceit, which goes right to the heart of Sutler’s government and suggest that V is not just a terrorist madman bent on wanton destruction, after all --and that the government has some very damaging skeletons hidden in its closet. 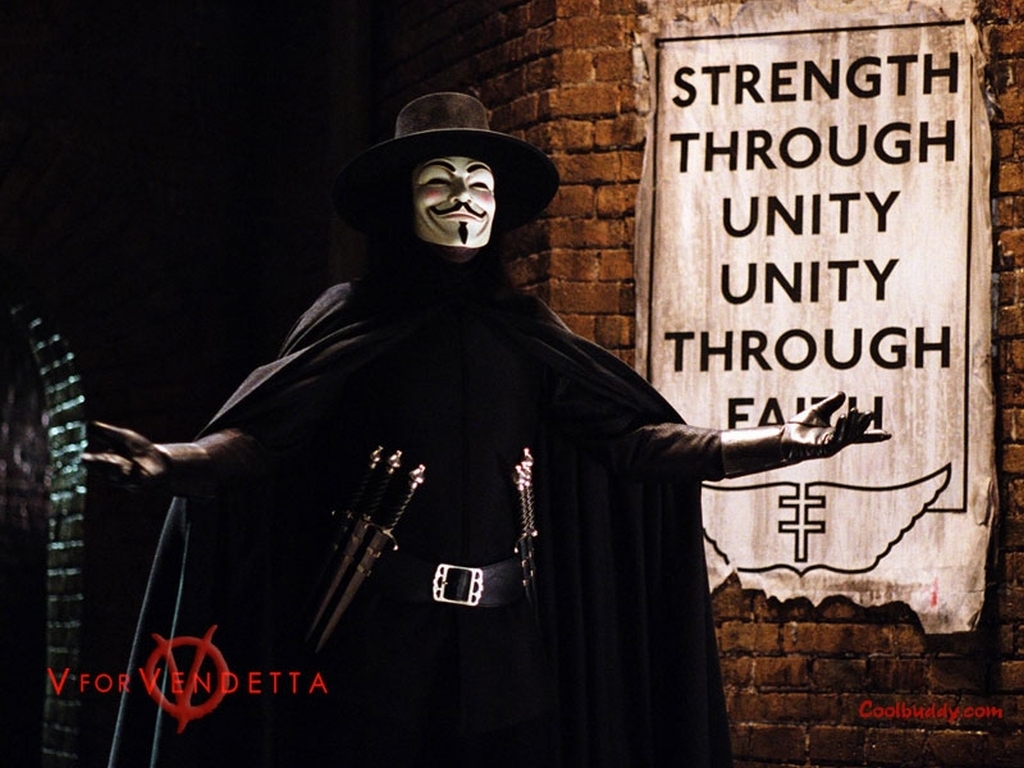 The film itself is wonderfully photographed and the storyline will pluck at the heartstrings of anyone with an ounce of the anarchist spirit within them. There are fantastic quotes and some of the set pieces -especially towards the end of the film- will have you punching the air, as V well and truly “socks it to the man”.

If you havenae yet watched this movie, do it now!

This is most definitely not a link to a snidey copy of the film!