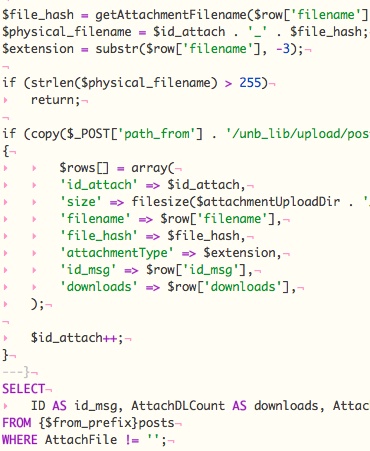 Today I’ve been "doing my brackets`", as the missus calls it; trying to port the immensely popular cough! Appletalker Forum I run from its current Unclassified Newsboard [UNB] software [which has been abandoned by the developer] over to a new forum software, called Simple Machines Forum [SMF], which should future-proof Appletalker for at least the forseeable future and --even more importantly-- allow me to build a forum theme which formats up nicely on smartphones.

I’m not sure of the exact dates and figures but, not long ago, we passed the point where more people were surfing the internet on mobile phones than on computers. So any site which is not mobile friendly is going to look pretty antiquated in the near future.

I’ve been planning this job for months now. My biggest problem has been that the forum software I’m currently using is pretty obscure and there are no scripts available that I’d found to date to allow you to convert its database setup to that of any other forum software. I had tinkered with trying to write a conversion script myself, but I’m just not good enough at speaking SQL [the language of love for databases] to have got anywhere with it.

Then today, completely at random, I stumbled across this German dude’s blog post which offered a home-made converter script for UNB to SMF.

Talk about Christmas coming early! - I downloaded the script, setup a clean copy of SMF and tried to migrate my old database across with the script…​

…​only to have the process fail with a mySQL syntax error at the first step. At this stage I’d usually have given up; mySQL error messages are about as unhelpful as it gets, but I decided to have a quick tinker with the script and see if I could suss out what was going on.

Comparing the new database layout with the code in the script, I noticed that the script was trying to copy stuff off the old database into tables in the new database which were named all wrong [for example it was looking for user_name whereas the table in my SMF database was called userName]. So I painstakingly went through the script, checking the table names in that against the actual table names in the database and I found that dozens of them were wrong. I corrected them one by one, running the conversion script again each time, to find out where the next error was until -eventually!- I managed to get the script to run right through to the end.

So I’ve now got a version of my forum running on SMF. Along with some Appletalker regulars, I’m now going to be clicking all over the new forum and making a list [hopefully not too long] of everything that’s been broken or messed up in the switchover. Hopefully, if the mess isnae too bad, I’ll not have to spend too much time squishing bugs and can get on with the next chore which will be theming the new forum to look as much like the old one as possible.

I’ve just realised I’ve worked on this non-stop [apart from a short break for dinner] from 8am this morning '`til 6pm this evening. That’s a twelve hour day for something which disnae even earn me any money…​

…​and on my Christmas holidays too. I must be mad!