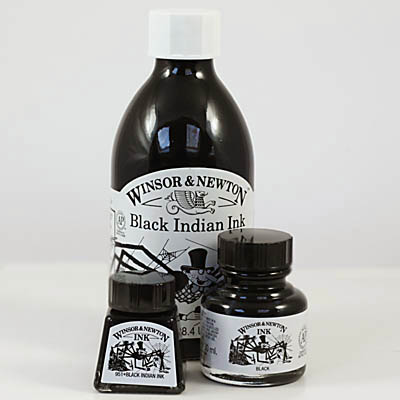 While I was working on my [to be honest, pretty risible] entry for the Sketchbook Project, over the Chrimbo holidays, I did a wee bit of doodling using a brush and Indian Ink. a technique I used to be quite into ‘back in the day’ when I was a callow youth at Art Collge, but which I hadnae used that often since.

There’s something really satisfying about the physical craft of laying down lines of treacly black, lovely thick and gloopy Indian Ink, using a brush; controlling the thickness of the lines with tiny variations in pressure and then waiting for it to dry, leaving a slightly raised bead of lightproof, waterproof permanent black on the paper.

So, even though my sketchbook turned out to be a half-arsed embarrassment, I really enjoyed my retro-dabbling with brush and ink and I decided to have a look on the intarwebs and see if you could still get travel paintbrushes. I used to have one of these years ago too; it was a wee watercolour brush which had a lid over the bristles, which when removed became the handle. I thought, if they still existed, I could get another one and stick it and a bottle of Indian Ink in my rucksack or pocket so that, any time I had a bit of spare doodling time, I could grab a bit of paper and do some nice therapeutic brushwork.

I found out that travel brushes did still exist. In fact here’s a pic of a nice travel brush set:

However, what was even more exciting was that, while hunting for the elusive travel brush, I stumbled upon a gadget of whose existence I had hitherto remained blissfully ignorant; namely the Pentel Pocket Brush Pen, which is like a pen that thinks it’s a brush…​ or is it a brush that thinks it’s a pen..?

I was pretty sceptical as to whether or not such a Frankenstein drawing implement would be any good, especially when I read the words “Manmade Plastic Filament” describing the actual business end of the beast. But, when I found them for sale on Amazon at around a tenner [including postage], I thought I might as well take a punt and try one out.

The pen itself is not amazing quality, just plain old black plastic, but it seems solid enough. It would be nice if Pentel did a more sturdy metal version too as things made of plastic seem to break pretty easily, when in my company.

The ink in the supplied cartridges is obviously not as thick and luvverly as proper Indian Ink --it would clog the pen if it was-- but it’s nice and black and opaque and [supposedly] waterproof and fade-proof too, So your artwork should survive the ravages of time. It’s comforting to think that generations yet unborn might also gain some enjoyment from my inability to draw hands properly.

As mentioned above, the pen’s brush/nib is made of some kind of bundled plastic filaments, moulded into a brush-like point. It’s not as soft as a proper sable brush, but it’s flexible enough to allow you to lay down lines varying in thickness from hairline to a few mm wide. I must admit, when I first got the pen, I was a bit tentative when it came to putting down thicker lines as I was worried that the brush/nib wouldnae spring back properly, if I pressed too hard and splayed it out too much. But I’m gradually daring to lean a bit heavier when needed and, so far, it’s kept springing back into a nice point. Only time will tell just how resilient the nib proves to be after longterm repeated flexing and splaying.

In use, the Pentel Pocket Brush Pen is impressively nice to work with. It really is like having a pemanently loaded paintbrush you can carry in your pocket.

Now, at this point, if I was a proper reviewer, I would conclude with some lovely images that I’ve drawn with my ‘new toy’ but I’ve not done much more than doodle with it so far --certainly nothing worth getting off my fat arse and walking over to my scanner for. So instead, here’s some video I found on youtube, showing some other scribbler giving the Pentel Brush Pen a workout: