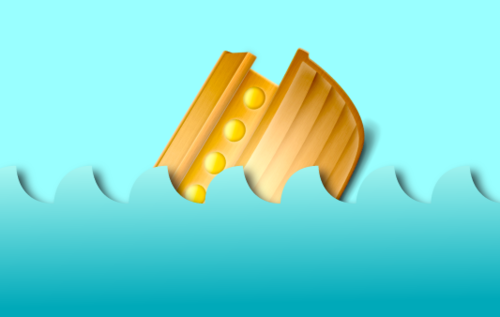 A week or so ago, I posted about a couple of recommended options for backing up your Mac. One of the options I mentioned was using Amazon S3 storage, in conjunction with a ‘front-end’ application to configure the backup options on your Mac. At the time, I recommended Arq, as my preferred application for the purpose, as I was currently trying it out, after many years of using [but not particularly liking] JungleDisc and, on first impressions, thought Arq was the better app.

Since I wrote that post, my opinion has changed; although Arq provides a much more Mac-like interface for configuring your S3 backups, this comes at the price of genuine configureability [is that a word?] and transparency. So, until such time as the developer of Arq fixes some glaring problems with it, I am henceforth un-recommending Arq and going back to using JungleDisc.

To highlight why I’ve made this U-turn, consider the following:

When you tell Arq which files and folders you want it to backup and then set it running, you get a nice Mac-like interface, with progress bar, telling you how the backup is proceeding. But [and it turns out to be a big but!] Arq does not tell you which particular file it is backing up at the time. JungleDisc on the other hand [via its logging window] gives you chapter and verse on every metaphorical twitch of an eyelid that the app makes.

Now, Arq's lack of a file-by-file analysis of what is actually uploading might seem a bit of a non-issue to you. after all, you’ve told it what files and folders to backup. Why do you need to know in which particular order, or at which particular time each individual file gets to the front of the queue?

Well, you don’t. At least not for the first backup. The problems arise when Arq runs subsequent incremental backups, which are supposed to only upload new stuff and the changed portions of any files already in your backup, thus keeping subsequent uploads [and your Amazon S3 costs] to a minimum. The big problem is that Arq's backup logic seems to me to be broken.

When I ran my second backup, a day or two after my first big backup had finished, I was surprised to see that Arq was planning to upload over 2GB worth of supposedly ‘new stuff’. Now, I know I’m a pretty productive guy but I dinnae edit video that often and I rarely work on large print-sized graphics, so I was pretty amazed that Arq reckoned I’d created 2GB worth of ‘something’ in a mere day or two.

Digging about on the Arq support forums, I found a few other folks pondering over similar mysteries and the consensus of opinion seemed to be that the problem lay with the user ‘cache’ and ‘tmp’ folders, which hold various temporary files and cached stuff, which you dinnae want to be backing up.

So, back I went to Arq and removed the cache and tmp folders from the list of what to backup. I then ran the backup again and found that this time Arq was intending to backup a still puzzlingly large, but not so alarming 500MB. so, I let Arq do it’s stuff and hoped that this was just a one-off.

Then, a couple of days later, I ran my Arq backup again and, this time, Arq announced its intention to backup over 700MB of data!

Again, there was no way that, in the space of a couple of days, I’d generated three-quarters of a GB of new data. And that, my friends, is where Arq's lack of info provision became a show-stopper for me. If I’d still been using JungleDisc , it would have generated a list before beginning its backup, showing me every single file it intended to backup and the size of each one. I could have tracked down the mystery 700MB in no time. With Arq , I had no information at all, except knowing that somewhere amongst the files and folders I’d selected for backup, there was allegedly 700MB worth of changes or new stuff.

Annoying enough even if it were just a piece of desktop software but, given that every upload Arq makes is adding to my Amazon S3 storage costs, there is no way I’m going to effectively write a blank cheque for these charges whilst Arq hides behind a veil of secrecy.

It’s back to JungleDisc for me. Fugly, a bit fiddly to setup and it disnae have a nice boat for an icon [which is alway a plus for me - remind me to write a review on NeoOffice some time!]. But, it gets the job done and provides you with more information than you need, every step of the way. 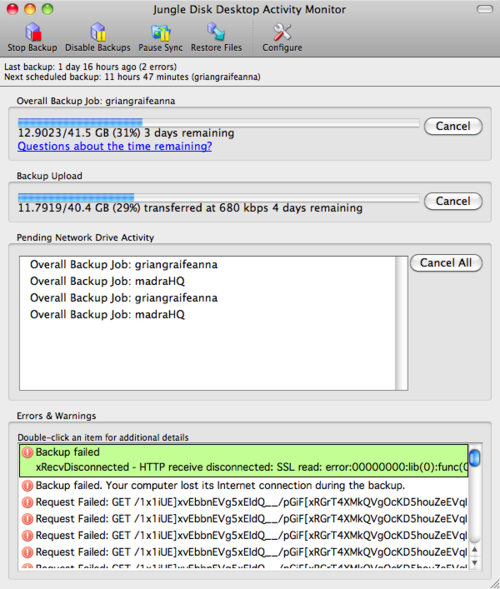 JungleDisc log window. more info than you can shake a stick at! 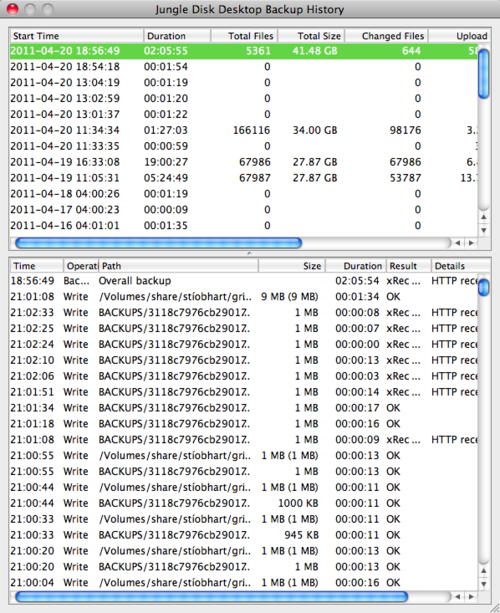 Personally I think this is a crappy way to do things and am glad I got my JungleDisc license back in the good old days. So, whilst I am now un-recommending Arq and returning to JungleDisc myself, I wouldnae go so far as to actively recommend JungleDisc to others. Not with their current rip-off pricing structure.