This task was the next step in our attempts to get the students to think about using pattern and illustration to fill in areas of a design. The Sardinhas and My Dream Course tasks had both focussed on filling an internal shape. This task was intended to revisit our old friend ‘negative space’ by requiring the students to fill in the space around a piece of artwork.

In the morning session, each student worked from a photograph of their house to produce a line-art version of their humble abode. I instructed them to work on A2 sheets in portrait mode and to fill the paper, allowing some space around either side and the top --even if this required a bit of artistic license such as detaching terraced houses and adding roofs onto flats.

For the afternoon session, we cut out each individual house and mounted them all side by side on a long roll of brown paper. Each person then had to fill the background around their house using pattern and illustrative mark-making. Where your background encountered that of your ‘neighbours’ on Animation Street, you were supposed to co-operate to blend one background section into the other. The idea was that the finished collaborative piece would comprise a long mural depicting a street of plain white line-art houses with a decorative, illustrative background.

Unfortunately the end result was [to put it charitably] piss-poor. With one or two notable exceptions students who, earlier in the week [especially in the sardines project], had been producing some really lovely and imaginative pieces of graphic design seemed to throw their design sensibilities out the window and ended up covering the background of the 15 or so feet long mural with a hotch-potch of barely primary school level scrawling.

I think you can gauge from the sound of grinding teeth issuing from your computer speakers how annoyed Alex and myself were with the outcome of this task. Most definitely not one to write home to mammy about.

Anyway, for what it’s worth, here was my section of the never-to-be-mentioned-again Animation Street. 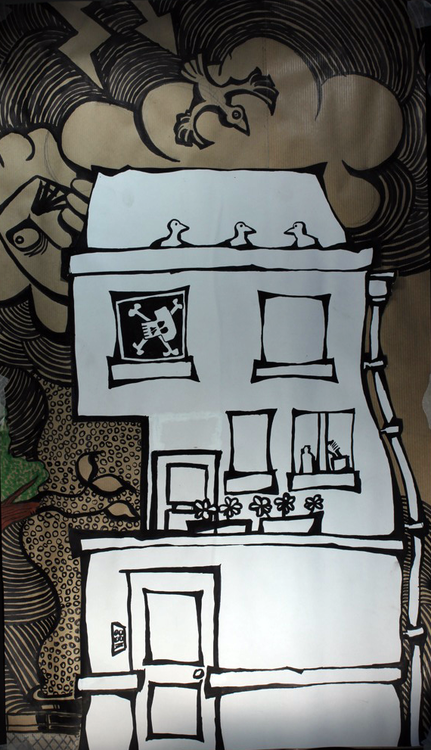