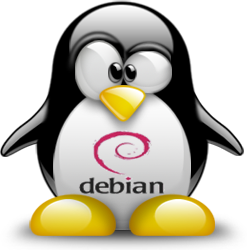 Fresh from all my “right side of the brain” wannabe-artistic efforts of the past couple of weeks, I thought I’d give old left-brain a bit of an outing and let him record how he [finally!] managed to get Debian Wheezy booting as the sole OS on an old MacBook Pro 4,1.

Disclaimer: As everything Linux-related I attempt seems to comprise at least twice as much luck, voodoo and chicken entrail interpretation as it does ‘knowing-what-the-fuck-I’m-doing’, this is very much one of those YMMV kind of posts. However it worked for me, where none of the dozens of learned Linux-expert discourses I read online did. So here goes:

[I’m going to try and keep this short as, if I ran through every permutation that I tried which didn’t work, this post would end up long enough to publish in ‘monthly installments which build into a complete encyclopaedia’]

Most of the literature on the subject that I’ve found on the web made my brain melt with discussions of the pros and cons of various partitioning systems and the intricacies of using Grub vs EFI vs Grub-PC vs Grub-EFI vs MBR in order to try and get Linux to boot on mac hardware in the first place.

I must have carried out about a dozen installations, using various combinations of those various bootloaders, installed to various partitions and using various partitioning schemes and the most I managed to achieve was being able to fairly consistently boot into a Debian CLI as long as I remembered to edit the Grub boot options beforehand to add "text" and "nomodeset" to the options --otherwise I just got hung up at a blank screen.

Once into a CLI I was able to login and install software but was unable to boot into a desktop environment as "startx" would just bomb out with errors about “no screens found”. It did that every time, apart from once when I must have accidentally moved a chicken entrail into a favourable position and I managed to drop into a desktop environment, albeit the fallback simple Gnome desktop and not the shiny new one.

Anyway, I was never again able to find the random series of mouseclicks and menu options which resulted in that brief moment of glory, so perhaps I just hallucinated the whole thing.

Well, enough of what didn’t bear fruit. Anyone who’s read thus far wants to know what mystical voodoo I performed in order to finally get it to work. Here’s the magic formula that cracked it for me.

By the time this attempt swung around, I was so bored with going through all this partitioning crap all the time that I just opted for the “Guided --use entire disc” option, which would reformat the entire HD and overwrite the OSX Recovery partition --thus removing my last safety net, should I brick the comp.

On the next screen I selected the ‘…​for advanced users’ option which partitioned the drive up into separate boot, /, home, usr and swap partitions and just accepted the default options. I was expecting this to be yet another failure so I just OK’d the installer’s suggestions for the sizes of all of these, without paying too much attention to either the nitty or the gritty. 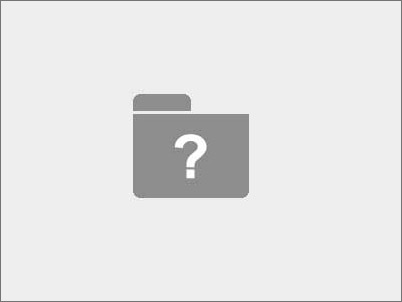 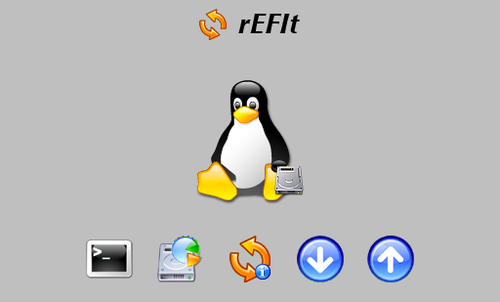 I chose this and rEFIt dumped me into me to a plain greyed-out screen with a greyed-out penguin --which just sat there doing bugger all and effectively froze up the comp.

The partitioning tool did ‘something’ but then complained that ‘something’ else hadn’t worked. Sorry, I know that was nearly as vague as one of my mammy’s descriptions when she’s asking me to troubleshoot her computer problems, but by this time I was ready to give up and bugger off to bed, so I wasn’t really paying too much attention at all.

So it seems that I have successfully managed to crack single-booting Debian on the MacBook Pro 4,1, without using any fancy boot-chaining, custom Grub tweaking or having to boot via the rEFIt menu each time. I am therefore either a Linux guru of Torvaldsian proportions, or am such a fuckwitt that I’ve just done something the really straightforward and correct way, after previously spending several weeks fruitlessly trying to do it the really complicated and wrong way.

My money’s on Option 2, but what the hey. The proof of the pudding and all thon…​

[Apologies for the crappy mobile phone camera work, but you get the [wobbly!] picture. Approx two minutes [including clicking buttons and typing in password] from clicking ‘Restart’ to having a usable Gnome 3 desktop again. Not too bad and actually quicker than the MBP was running OSX Mountain Lion.]

I realised after shooting the above that I’d not included anything in the frame that actually showed that this was Debian booting on a MBP and not just any old generic PC, so here is the output of lshw, to prove the veracity of my outlandish claims. 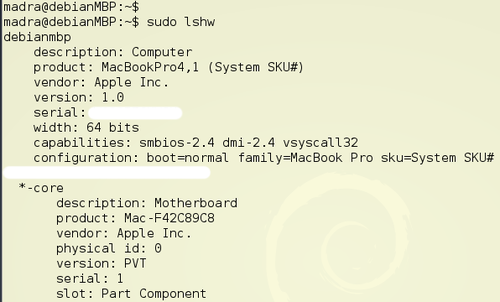 Now for several more weeks tinkering and adjusting to try and get everything tweaked to my satisfaction. Out of the box, I’ve been pretty impressed that a lot of things just work: hardware keys for screen brightness, volume, etc, trackpad, monitor colour calibration. However I’ve still to try and get WiFi up and running and I’ve noticed that a few settings don’t seem to ‘stick’ after a reboot --for example Bluetooth is always on at startup, even though I keep turning it off.