Nice start to the day today, as someone of the managerial ilk arrived to do an unannounced Lesson Observation on me. No doubt in a couple of week’s time I’ll get the habitual feedback report telling me what an awful teacher I am again, because I didn’t have a lesson plan sitting in pride of place on my desk, formatted to official college standards on the official college spreadsheet and written in government issue edu-babble.

But enough of that dung. Let’s get on with the fun art stuff!

All the students put in another hard day’s drawing and scribbling away on their Muybridge sequences and one-by-one as they finished, we loaded their drawings onto the rostrums and I showed them how to import the images into DragonFrame. As most people had left very little space between their drawings we then had to export each sequence from DragonFrame as an uncompressed QuickTime movie, which was then imported into AfterEffects for a bit of cleaning up. Where possible, we just cropped the movies down to the central character, using the “Region of Interest” tool in AE. When that wasn’t good enough we had to resort to using key-framed vector masks to remove extraneous details.

In between helping the students and not filling in spreadhseets, I managed to get Ollie the Ostrich’s perambulations finished myself. In the end I decided to work with the shitty non-waterproofness of the so-called Indian Ink, rather than fight it. So I used a wet brush to smear it around the edges of the body a bit, as I thought this might give a nice wispy, fluid effect in keeping with the feathery nature of old Ollie. For the legs and neck, I used some quick light washes of watercolour, just to give it a bit of depth. Here is an example still image: 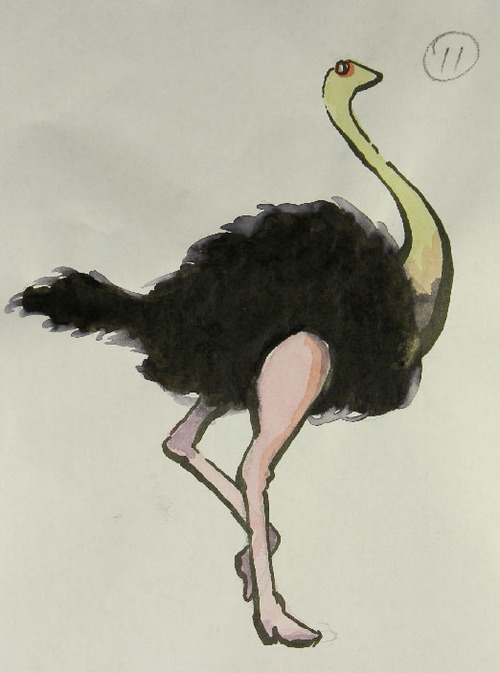 And here is the finished walk cycle, after importing into DragonFrame and a bit of croppage in AfterEffects [assuming, of course, that the intarwebs will decide to play ball with my highly irregularly shaped movie file]. Almost a nice smooth cycle. Just a bit of a jump at the end. I reckon if Eaddy baby had just shot one more frame of Ollie boy, we’d have nailed it: