This week, it was time to roll out the new Character Design unit, or Introduction to Methods, Materials and Making Processes, to give it its show name. We kicked off with the old classic 25 Expressions worksheets.

Before springing it on them, I gave the students about 25 mins to come up with a character and then draw him/her/it [head only] from the front. As I’m not a complete bastard, I did give the students a few clues before they started, which would make for more “expressionable” characters, such as advising them to use the full complement of facial features and maybe also include eyebrows or ears, etc.

In spite of that there were still a few groans of dismay from those whose characters were of a more ‘inscrutable’ bent, when I produced the 25 Expressions character sheets and asked everyone to see if they could make their characters run the gamut of emotions from Anger to Zoomorphism…​ er…​ actually, that’s not strictly true but these things always need a bit of an A to Z vibe going on!

Anyway, since it was one of those lessons where everyone is scribbling away furiously on good old-fashioned dead trees and not pecking my head every five minutes to help them with some software problem, I had time to play too. So, at the top of this ‘ere’ post, please meet Kevin Peterson, one of my characters who is waiting, poised to spring onto the internet and take the world of animation by storm [Just as soon as ever I get a spare week or two to do some of my own work!].

Kevin Peterson’s claim to fame is having huge teeth, a stupid voice and thinking he has the most unique name in the world. Honestly, it gets lost a bit in the translation. Inside my head it’s a hilarious concept. Just you wait!

After 25 Expressions sheets were complete, I asked the students to take their character and work it up into a finished artwork in Illustrator [it never hurts to practice pummelling those vectors!] and then design a poster, promoting the character and giving some info about him/her/it. Said poster could use any kind of suitable visual analogy; Wanted Poster, Trump Card, Pokémon Card, Movie Poster, etc.

Here are my rough scribbles for a few possible Kevin Peterson posters: 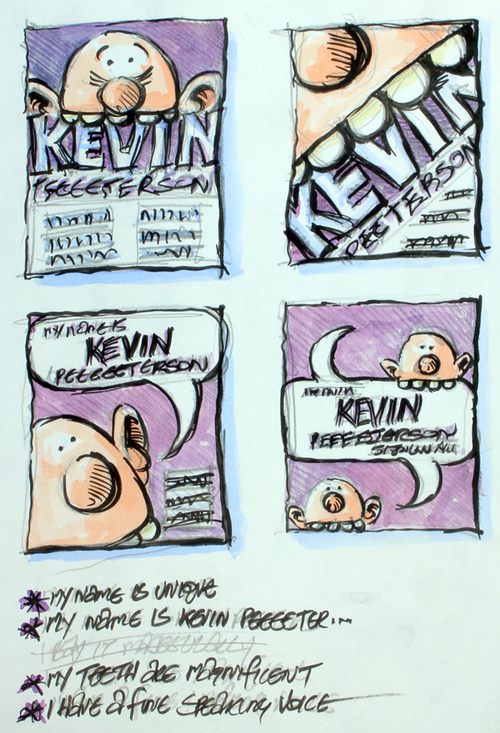 And here are a couple of them worked up into a semi-presentable format in Illustrator: 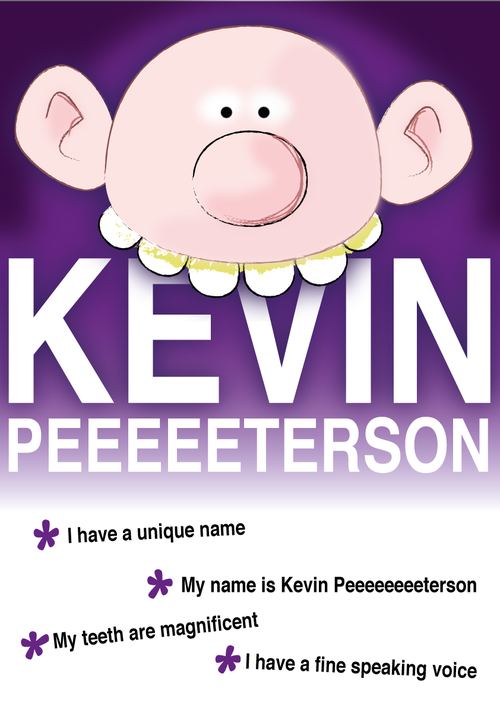