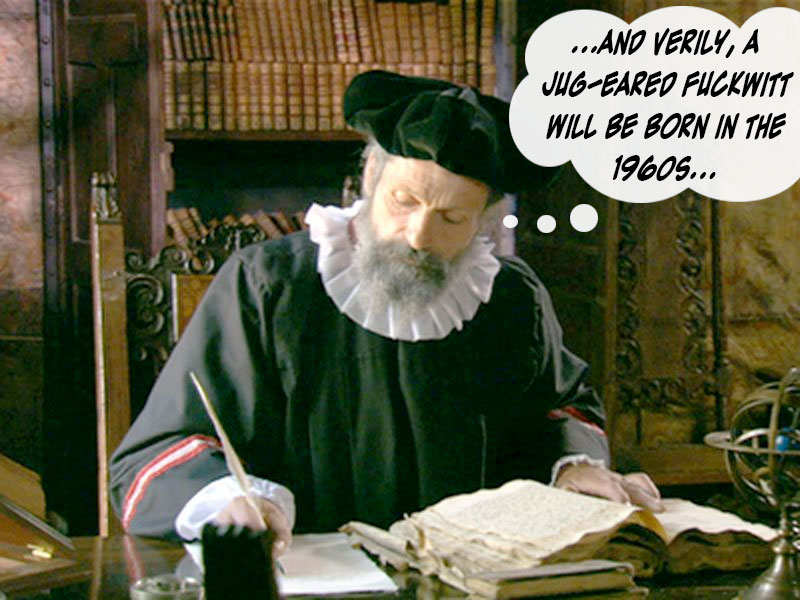 It seems like only a few months ago I was making my annual Nostradamus Corner predictions for 2015 after packing up my crystal ball to send in for servicing, when I gauged the accuracy of my previous year’s predictions.

So, how did we do last year? Did I get my mojo back and unnerve the world with my uncanny abilities to peer into 'the shape of things to come'?…​ or, as is usually the case, did I show about as much foresight as Stevie Wonder, strolling towards an open man-hole?

Let’s have a shuftie. Here were my predictions from last year and their 'scores on the doors':

1: Philae will sadly fail to wake from his winter nap as comet 67/P approaches nearer the sun.

I think we’ll give that a half-point. Philae did wake up for a wee while, but then promptly dozed off again and hasn’t been heard from since.

Null points. Bitcoin finished the year at ~€393. Seems like, in spite of all its woes, you just can’t keep a good pyramid scheme cryptocurrency down.

3: A high profile member of the royal family will snuff it.

Oh dear. Null points again. Unless you let me count Lemmy? After all, he was Rock’n’Roll royalty.

4: Scientists will find a cure for Ebola.

Well, after early reports of a breakthrough, we’ve not heard much in the way of confirmation since. So, in the interests of fair play, I’m giving myself another half point for this one, as I’m still not sure whether they have or haven’t found a cure.

5: One of NASA’s Mars Rovers [more likely Opportunity than Curiosity] will find evidence of primitive life.

'Fraid not. It’s been another year of massively pre-hyped announcements from NASA which turned out to be in essence:

We’ve found a thing which might point to thing, which might indicate the presence of a thing which indicates the possibility of a thing which, under the right circumstances could be an indication of a pre-disposition towards the existence of the conditions needed for the building blocks of life to appear, or have previously appeared, some time in the past or next eleventy billion years.

6: Another Eastern European country will see seperatist pro-Russian agitations similar to those in Ukraine.

Oh dear. The lad’s in danger of getting sent off the pitch at this rate.

7: Leaked docs will reveal that missing Malaysian Airlines flight MH370 was shot down by the US.

The substitute’s warming up on the touchline!…​

8: Islamic extremists will use a home made drone to deliver a bomb in London. Minor damage caused but Gov’t will clamp down on ‘unauthorised’ flying of drones.

I’m grasping at straws here, to award myself another half point: No such attack took place in London, but we did have a horrific 'more conventional' attack in Paris. And the US Government has decreed that all owners of drones over 250g must register their gadgets with the Federal Aviation Authority. Expect the UK to follow suit, any day now. [that wasn’t a prediction, just conjecture!]

Godammit! --what do I have to do to earn a full point here? We had the first self-driving car accident resulting in injuries, but none of the victims had the basic common decency to cash in their chips, just so I could look a wee bit less 'wrong on the internet'.

Some readers are on the pitch!…​
They think it’s all over!…​
It is now!

Wow! --talk about an injury time winner. Back of the fucking net!

Go me! Actually, I think all I’ve proved here is how really piss-poor my predictions in 2014 were. All things are relative, as they say. Anyway, tune in later tonight [if I can be arsed penning another post], or possibly some time tomorrow, to read my predictions for 2015. I’m afraid I can’t give you a more precise timescale than that.