As is often the case with articles about the ever-changing world of the intarwebs, this post has subsequently been OBE’d. Flickr have been bought by SmugMug and no longer offer 1TB free storage.

By now, probably everyone has come across one of these lovely graphics, whilst perusing their favourite internet forums [OK. I know it’s "fora" but that sounds too contrived]

Without delving too deeply into the controversy behind this; basically it’s happening because thousands [if not millions] of people posting on internet forums were using the image hosting service Photobucket* which, without warning, recently did away with all its free image hosting offerings, replacing them instead with the above ransom note in graphic format, which links back to a page on Photobucket’s website, inviting people to pay up a wallet-raping $399 a year, if they ever want to see their images alive again.

*[No. I’m not linking to them. Even though I never used the service and am therefore unaffected, I was similarly burned by a service called Droplr a few years back. So I heartily hope both companies go spectacularly bankrupt]

Needless to say, most people’s response to that was a resounding "Fuck you, Photobucket!" which, while heart-warming, resulted in those images being effectively lost forever. Thus earning Photobucket the unenviable reputation of being "The Company That Broke the Internet".

Since a lot of folks are now casting round for an alternative to host their imagery and are understandably wary of being caught out again, I thought I’d chuck my tuppence worth in by showing you how you can host images for your forum posts on Flickr.

Now, before some smart-arse points out the obvious fact that I’m suggesting that those reeling from the shafting given them by one 3rd party image hoster should leap, ring still a-stinging, into bed with another one; the sad fact is that, unless you’re prepared to pay for image hosting, you’re always going to be at the mercy of the company who’s offering you it for free. Remember folks:

If they’re giving you it for free --you’re probably the product.

That said, I’ve been using Flickr to host the images I post on forums for years now and never had any problems. Now, that doesn’t mean they won’t pull the plug tomorrow but --so far, so good.

1: If you’ve already got a Flickr account, you’re good to go. If you haven’t, or you want a separate one for forum images, Sign up here

2: Once you’re up and running, click on the Upload icon at the top right of the main window

3: Flickr supports drag’n’drop. So you can just drag your images from your computer into the browser window and they’ll start uploading. You don’t need to worry about down-sizing them either, for forum use. Flickr can resize images on the fly, so we’ll take care of that aspect later. Most of the usual flattened image formats are supported [gif, jpg, png] but not layered formats such as Photoshop or Illustrator. You’ll have to save flattened versions of those first.

4: while your photos are uploading, you’ll need to make sure that they are viewable by everyone. If memory serves me correctly, this is the default setting. However, I have set my Flickr photos to be Private by default. So I need to change this whenever I upload an image that I want to make public [by placing it on a forum, for example].

If you look at the left of the image uploading screen, you’ll see an indication under Owner Settings which shows whether your piccies will be private or public. You can see that, in my case they’ll be "Only visible to you" ie. private. So I need to change this.

5: If you need to, click on that Only visible to you text and it’ll open a popup menu, where you can select to make the images public by changing it to Anyone

6: If you’re using your main Flickr account and you want to keep these forum images separate --or if you just like things organised, you may also want to create an album especially for these types of pic. To do that, click on the Add to albums link in the sidebar.

You can then either select an existing album to add these images to [if you have some already created], or you can type in the name of a non-existent album and Flickr will offer to create that as a new album

…​.or create a new one image::/grafix/flickrimagehosting09.png[]

7: When you’ve done all that, click on the Upload X Photos button at the top right of the window and your images will upload.

1: Once you’ve got some images on Flickr, you’ll see them all listed when you visit your Photostream page, which will be at https://www.flickr.com/photos/<your-flickr-username>/?

[You can only see one on this screengrab as Flickr displays the topmost image bigger than the rest]. 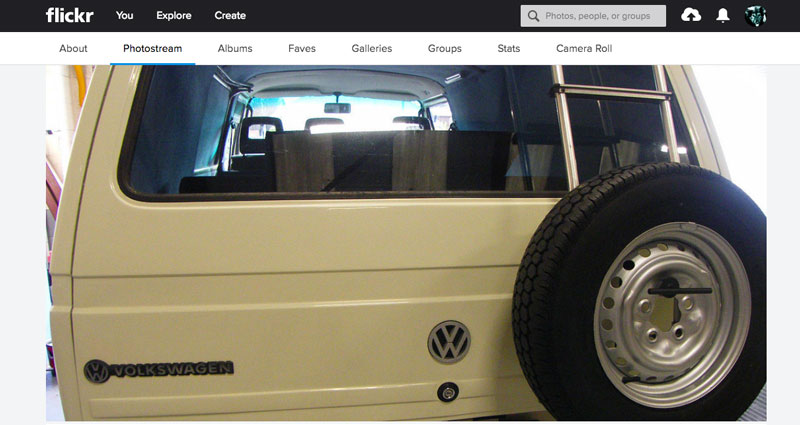 2: To use any of the images, first click on it from that Photostream page, so you’re taken to the individual page for the image in question. [The individual image pages show the piccie on a black background]. Below the bottom right of the image, you’ll see a series of icons. You need to click on the download one:

3: That will pop-up a menu with the following options. Don’t click on any of the sizes listed. That will just download the image to your comp. Instead click on View all sizes

4: This will take you to a page where you’ll see a series of links to different available sizes of the image. [Remember I said earlier not to worry about resizing your images, as Flickr can do it on the fly?].

Select a size appropriate for the forum you’re going to post on. Around 800 - 1000px wide is probably about as big as you should go. Otherwise you’re going to piss people off by dropping a humongous image into the middle of their forum, breaking the layout and --worst crime of all: forcing people to scroll horizontally to read the text!

5: Here, I’ve clicked on Medium 800 to select the 800px wide version of the image, which is now displayed:

6: Now CTRL+Click [Mac], Right-Click [Linux or Windows], or Tap+Hold on mobile on the image itself, to bring up the contextual menu. From that resulting menu choose "Open Image in New Tab" [or whatever the equivalent is for your particular browser. The wording may be slightly different]

7: Switch to that new tab wherein the image is displayed. The address at the top of the browser window is the direct link to that image. Copy that address and you’re ready to embed that image on your forum posts:

1: Armed with the URL or address of the image, which you previously copied from Flickr, you’re ready to embed that image in a forum post. How you do so will depend on how the forum software handles image embedding.

[Ignore the crazy colours. My syntax colouring plugin doesn’t recognise some of these formats]

That’s usually caused by you linking to an image that’s stored on your local computer instead of online. The address of the image should start with http://... or https://.... If it starts with / or file://... you’re trying to link to an image that isn’t actually on the intarwebs.

Make sure the images are set to be viewable by "Anyone". See step 4 in the Uploading to Flickr section

Make sure you choose a size that won’t break the layout of the forum software you’re trying to post on. Most of them won’t play nice with anything wider than around 800-1000px.

This happens from time to time --especially if you’re uploading multiple images at once. No big deal. Just try re-uploading the images again. It nearly always works second time.

The honest answer is "I don’t know".

On the one hand Flickr don’t present a user-friendly way to do this. They do give you official options to link to an image on Flickr indirectly [ie. with Flickr branding and links back to the Flickr website attached] --but they don’t allow you a similarly straightforward way of grabbing the direct URL of an image.

On the other hand however, they don’t actively stop you from doing linking to images directly. It would be trivial for them to prevent people from "hot-linking" [which is the official term] back to images hosted on their site --see what Photobucket have done, for an example of this. But Flickr choose not to do so.

For these reasons, my assumption of Flickr’s position is that: while they’d much rather you link to images using their preferred method, their attitude towards anyone prepared to go to the trouble of linking directly is 'fair play to you!'.

I stand to be corrected.

I hope that helps some of you, who’ve been left stranded by Photobucket and their slimey ilk. Written down like this, it all looks a bit of a palaver and it is admittedly not as "one-click" user-friendly as some of the other photo hosting sites.

But, after you’ve done it a few times, you’ll find it doesn’t take more than a minute or two to upload an image, select the appropriate size, open it in a tab and copy the address. And, as I said earlier [touch wood!] so far, in all the years I’ve been using the site, Flickr have not remotely looked like withdrawing their free offerings. YM as always, however MV.

Any questions, or bits you’re not sure about, ask in the comments.