I bought one of these after seeing a couple of YouTube videos where people were using them for drawing. My favourite medium for drawing is dip pen and ink. But that has obvious drawbacks as regards portability. So I’m always on the lookout for 'portable' alternatives, for when I’m out and about. I went for the narrowest nib size thinking this would give the closest approximation to my dip pen nibs as regards the range of line widths it can produce. 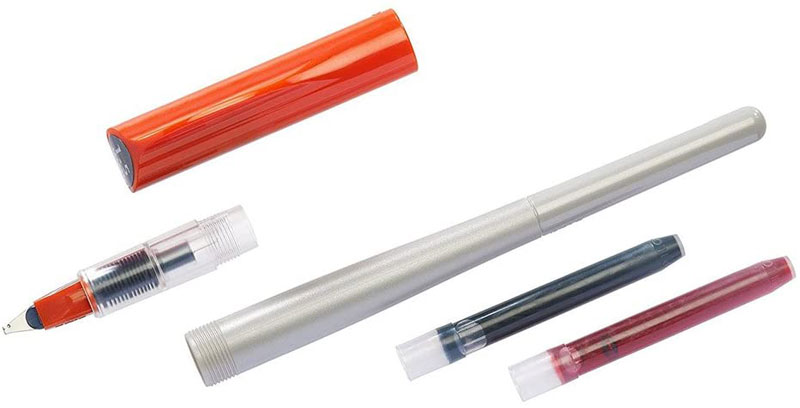 I’ve only had the pen for a couple of days, so these are very initial impressions:

As others have said, the cap design is very odd. It won’t 'post' on top of the pen when you’re using it. So it’s very easy to lose as you have to set it down somewhere. Also, although it looks like it just pushes onto the pen, it actually screws on. Something I only sussed out after a while and wondering why it didn’t seem to stay on properly!

Drawing with the pen is good fun and a novel experience. It requires a completely different technique to using a normal dip-pen or brush pen in that; instead of pressing harder or lighter to vary your line width, you slightly roll the tip of the pen, so it’s more edge-on or flat. I was surprised how quickly you get the hang of it though.

The ink flow is nice and fast and wet which, being a dip-pen user, I like in a pen. Although I see from the reviews others prefer something a bit more restrained. The ink dries nice and black. I’ve not tested its reputed waterproof-ness yet.

I was a bit disappointed to find that the ink bleeds through the paper quite badly in my pocket sketchbook [which to be fair has relatively thin paper]. Something neither my UniPins or Pentel Brush pen do –although it doesn’t bleed quite as badly as my Staedtler Lumocolours

So, all in all a nice addition to my pen stash and one you might like to try, if you’re an aficionado of pen & ink, or brushpen work. Knocking one star off for the silly cap design and the 'bleediness' of the ink.

UPDATE: A few months further on and having used up all the cartridges that came with the pen, I decided to risk refilling it with Indian Ink, rather than shelling out for the stupidly over-priced cartridges.

To my surprise, I found that the pen worked just as well when filled with Indian Ink and I was further delighted to find that it did not [as I was expecting] dry up and clog the pen. In fact, it’s over a month since I filled the pen with Indian Ink and, apart from wiping the nib with a tissue before putting the lid back on, I’ve not done any cleaning maintenance at all and it still works fine, with no drying or clogging of the nib.

So, for me now, this combo is as close as I’ve managed to get to finding the holy grail of the 'portable dip pen'.

Note though that I use Talens Indian Ink which I reckon is just a wee bit thinner than [for example] Winsor & Newton’s bottled Indian Ink. So, if you want to try refilling your Parallel Pen with another brand of Indian Ink, your mileage [as they say] may vary.