I recently bought one of these from another online retailer. And, on first appraisal, I was very impressed. 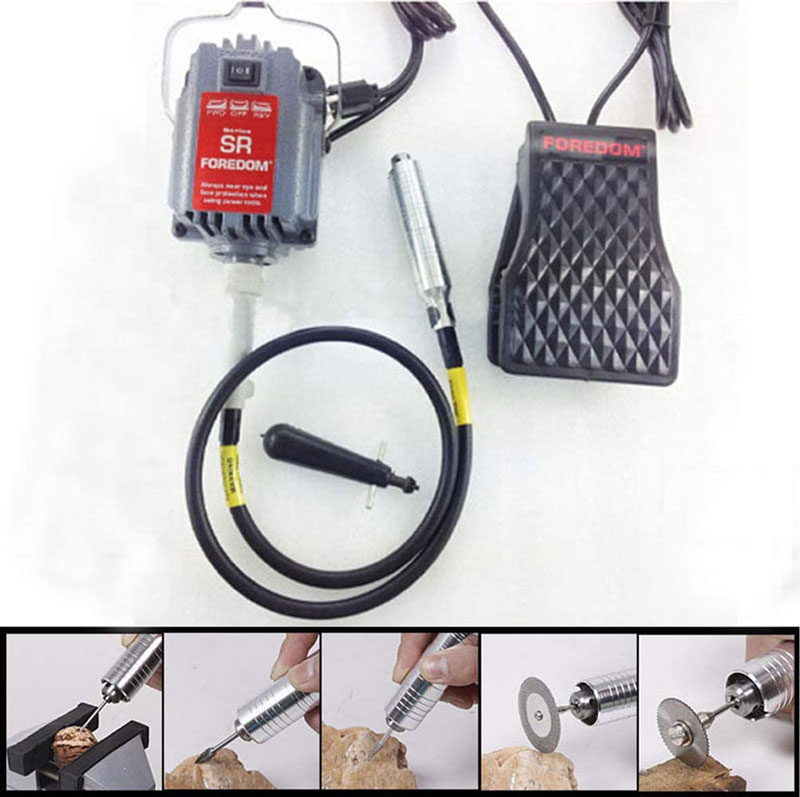 Obviously this is a Chinese copy –people expecting these to be a genuine Foredom SR for 1/4 of the price of a USA made one are being a bit naïve. However the unit is reassuringly heavy and seems very well made, as does the flex-shaft and business end. In operation the device runs smoothly and [relatively] quietly in both forward and reverse. Durability-wise, I’ve not had it long enough to comment. I’ll update this review as and when I’ve used it for a decent length of time.

The only minor downside for me was that mine came with a 2-pin Euro plug, rather than a 3-pin UK one. This was a bit concerning as I think most people would be tempted to just plug the 2-pin plug into a shaver adaptor and run it that way –however the manual clearly states the device should be earthed, so this would be a risky thing to do.

Anyway, as the cable from plug to pedal was also fairly short, I decided to replace the whole cable, rather than just fit a UK plug. When I opened the pedal up to do this, I was alarmed to find that the pedal had been wired with the circuit break switch on the Neutral wire, instead of the Live. This is potentially very dangerous as it means there is a live feed going into the device, even when the foot pedal isn’t being pressed. As the outer metal casing of the device is earthed, this could mean a short circuit inside the device could leave the casing live –even when the foot pedal is not pressed. I’ve since rewired the pedal correctly and fitted a longer cable.

As I said at the top, I did not buy my Foredom from this particular Amazon vendor, so it is not a reflection on his/her or any particular seller and it may be that I just received one where the guy [or gal] on the production line that assemlbes the foot pedals was having an off day. But I’ve linked this review to the top-ranking version of these Chinese Foredoms, just to make as many people as possible aware that there may be a problem with some of them. I’d advise buyers to have a look inside their foot pedal [simple to open it up via the single screw in the bottom] and set your mind at ease by checking that the brown Live wire is the one being interrupted by the switch assembly and not the Blue neutral one.

Don’t just take my word for it though. Foredom publishes a PDF showing the correct wiring for the foot pedal switch. Available here: