You ever do that thing where you’re searching for something on the intarwebs and one of the search results looks weirdly familiar…​. and then you realise it was something you wrote yourself in a previous lifetime? No? Just me then.

Well, anyway, I found this review I wrote under a throwaway account on GoodReads a while back and thought "Why the hell not. It’s easier than actually coming up with something new to bore my non-existent readership with!".

So here you are…​ 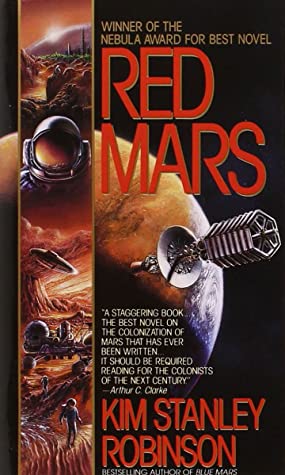 I know it’s pretty unfair to review a book I haven’t finished reading. But I’m just about to throw the towel in on what must be about my fourth attempt to get through this stodge-fest and I think I’ve suffered enough to have earned the right to an opinion.

On paper [or eInk!] this book should be right up my street. I love 'big' SciFi of the Arthur C Clarke / Stephen Baxter kind and, to be fair, those parts of the book which describe the journey to Mars, the landing, actual building of settlements and first steps at terraforming are pretty good --albeit some of the science seems a bit shaky, even to a layman like myself.

Unfortunately, these passages are few and far between. The rest of the book is taken up with some of the most tedious prose I have ever read in my life. KSR has obviously purchased 'The Idiot’s Guide to Novel Writing' and really taken to heart the chapter which advises fleshing out your basic plot with some 'human interest' angles.

This is unfortunate for several reasons:

None of his characters [with the possible exception of Arkady] are remotely interesting. If Douglas Adams had written this book, we’d definitely be amongst the crew of the B Ark here.

KSR’s idea of 'fleshing out' his characters is to have them drone on and on to other people for page after page about their thoughts on subjects so banal that, in real life, they would empty a room as soon as they walked into it. One of these recurring snore-fests is some kind of love triangle involving the female leader of the Russian party and the two male leaders of the American crew.

Nadya [for it is she] spends what seems like half the novel boring one of the other characters to death about which of the two Americans she fancies most that week. Honestly, it’s like something from a primary school playground-- "I don’t like Tommy any more. He smells! I like Jimmy now!" --except that KSR manages to wring about half a novel out of it.

At one point, the character who is the recipient of this unending soul-baring actually thinks to himself something along the lines that he’s 'not looking forward to listening to Nadya speaking at length about unimportant matters' Yes, folks. In an amusing bit of 'meta' KSRs characters are so tedious, they even bore each other!

Then there’s Michel and his crisis of conscience!

At one point in the book, Michel, the project’s psychologist, has some kind of crisis of conscience, mental breakdown or somesuch [you know, the old 'Physcian. Heal thyself!' meme] whereby he basically gets a bit homesick for Earth and asks himself "What’s it all about, Micky boy?" KSR literally spends an entire [long!] chapter setting down every idle thought that flits across Michel’s skull, whilst he’s musing on his inner dissatisfaction.

The entire chapter is a colossal wall of the most impenetrably boring prose ever committed to paper. At one point in this expanse of ennui, Michel starts musing on the personality traits of the various other members of the mission, to gauge where he himself 'fits in'. This involves another seemingly interminable wall of text that reads like it has been copy/pasted directly from a lengthy Wikipedia article on personality types [complete with diagrams!].

And, at that point, I’ve given up. For the fourth time!

Somewhere buried inside this monstrously tedious tome is the germ of a decent novel. But it is buried too deep for this particular reader’s extrication.